So according to Blue Rhino and the US Department of Transportation, propane cylinders have a good for life of 12 years, and then can be followed up with recertification that MUST be affixed to the tank in the form on a sticker.

During the massive ice storms and resulting power outage that clobbered Texas this week (Feb 15 on 2021) I used up my prior propane, and happened to be at my local HEB store when the Blue Rhino truck was there offloading, so I just went ahead and bought a new tank since nobody is certain we are out of the woods yet weather / power wise, and should I need to, I want to be able to run my Portable Buddy Heater to keep from freezing my kneecaps off.

So I get the filled to only 15lbs of propane tank (why don't these exchange programs fill a 20lb tank with 20lbs of propane?) and I got to looking at it. Mostly because it looks like it was repainted by some kid in 6th grade shop class.

Okay so maybe, just maybe they recertified it.

Yeah that would be a nice idea.

No sticker, anywhere on the tank. Just the plastic sleeve Blue Rhino puts on them.

Call Blue Rhino customer support maybe I am misreading the Safety collar even though I did propane tank refilling professionally, admitedly decades ago, but I know the process.

I know they are trying to fill a MASSIVE backlog in fuel orders due to the storms. But why on earth did Blue Rhino keep this tank in circulation?

Something is massively wrong here. I am not sure but it looks like Blue Rhino is selling massively expired, and non certified tanks to retail customers who don't know SQUAT about DOT regulations, from retail establishments, so in order to get them home these same customers MUST transport them, after Blue Rhino transports the filled tanks to the store. 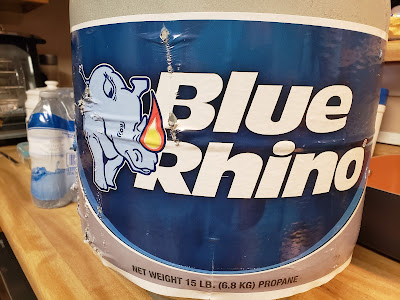 The fresh off the truck Blue Rhino Propane Exchange tank. 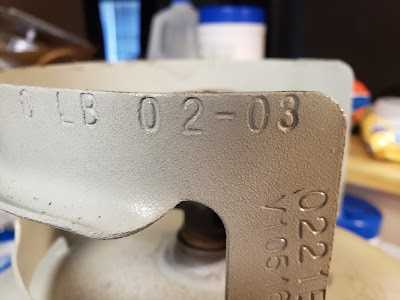 Date stamp 02-03. Nothing else resembling a date stamp is on 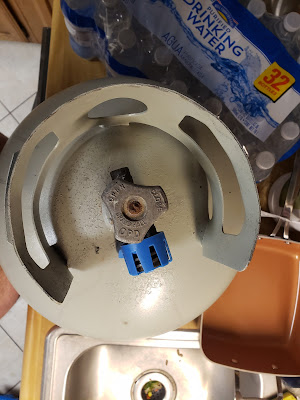 Not a recertification sticker to be found anywhere!
I haven't written a blog post in quite a while, but I am kind of driven to do this now mostly out of frustration. You see after making this discovery, I tried calling Blue Rhino customer service number, and found that the prompts I was faced with required me to be a commercial account customer, not a retail consumer. It would seem that unless I have the big truck pumping propane into my giant tanks at the shop, or farm or whatnot, they just don't seem to want to talk to us.
I will be sending them an email asking about this as I have concerns. I do NOT want to be legally liable for transpoting expired / no longer certified cylinders in violation of federal regulations.
I am posting this mostly as tail coverage for myself to document that I am doing my due dilligence to get this corrected. My primary purpose for having bulk tank propane is for running camp appliances, thus transport is sort of a requirement for me...
Posted by Daves Workshop at 6:08 PM