Let's just come out and say it like it is. Miter saws, particularly sliding miter saws, spew dust everywhere,
and are a royal pain in the tail to collect from.

But it's not like we should stop trying right? I mean that dust is dangerous to our health, and of course the cleanliness of our shops,
the electric motors of our power tools etc...

So how exactly do you collect dust from a miter saw, and again, particularly a sliding miter saw?

Well you put a hood, where the dust will be, funnelling the dust using as little air space as possible, toward the dust collection ducting.

So some quick designing on mine I came up with what I hope and pray is an effective design. The hood itself is a simple open front box, with a curved back, to funnel dust toward the duct, as well as a curved cut out in the top to allow the head of the saw to move its full depth without hitting the hood in all positions.

I designed mine such that the hood opening is 16" tall, which just barely allows the hose to clear at full back retraction. I was using readily available shops crap 3/4" plywood to create the frame, and top. And I made some mistakes... 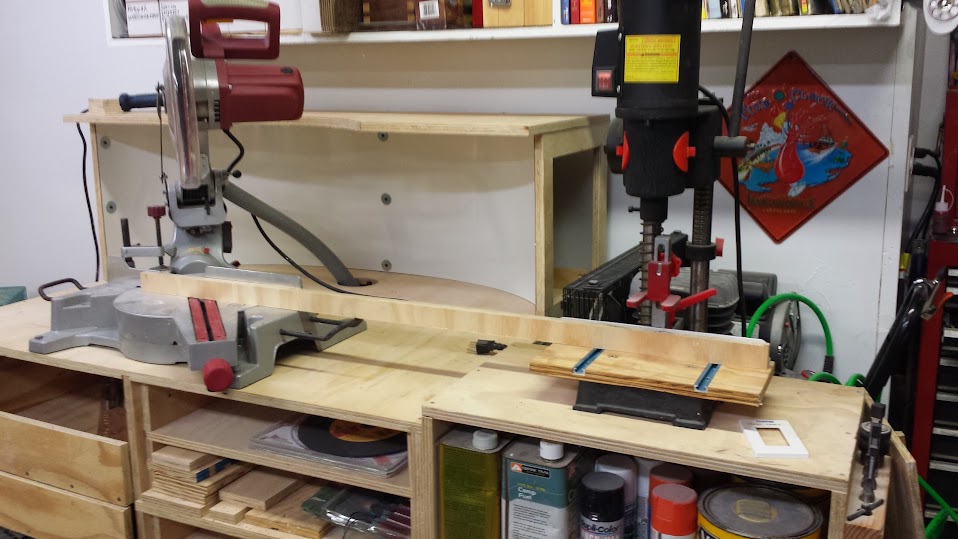 Not quite the depth I was going for...
I measured 4x, and the board is still too short!

Answer is a simple, use the biscuit joiner and glue and just add extensions on to the assembly to bring the whole thing to a depth of 23 inches. This allows for ample clearance to the miter saw fence, even allowing for an add on fence with production stops. 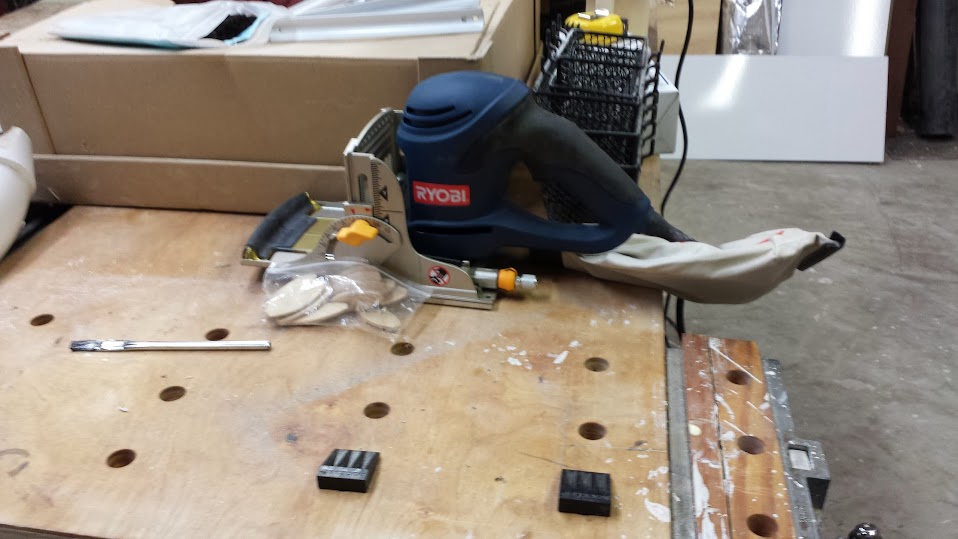 Maybe I spent too much time watching Norm Abrams New Yankee
Workshop, but I LOVE my biscuit joiner! 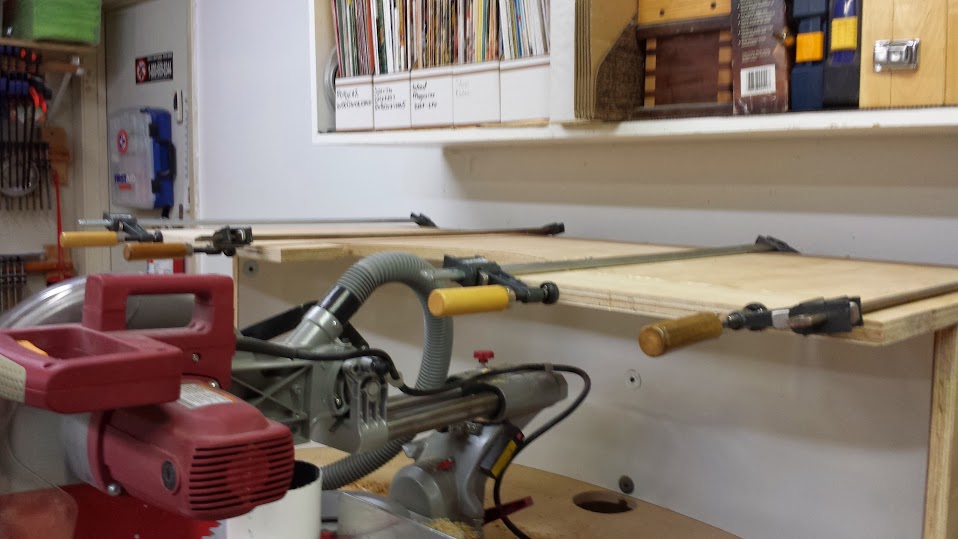 Biscuits and glue, combined with my HF bar clamps get the job done!

I used thin, probably 1/8" tempered hardboard with one slick melamine coated white side as the back panel as it was easy to curve. Like the framing it was glued and screwed into place. I used fender washers to prevent tear out.

A bead of clear silicone adhesive caulk seals the curved panel to the top, and to the bench top. So air intrusion is kept to a minimum. 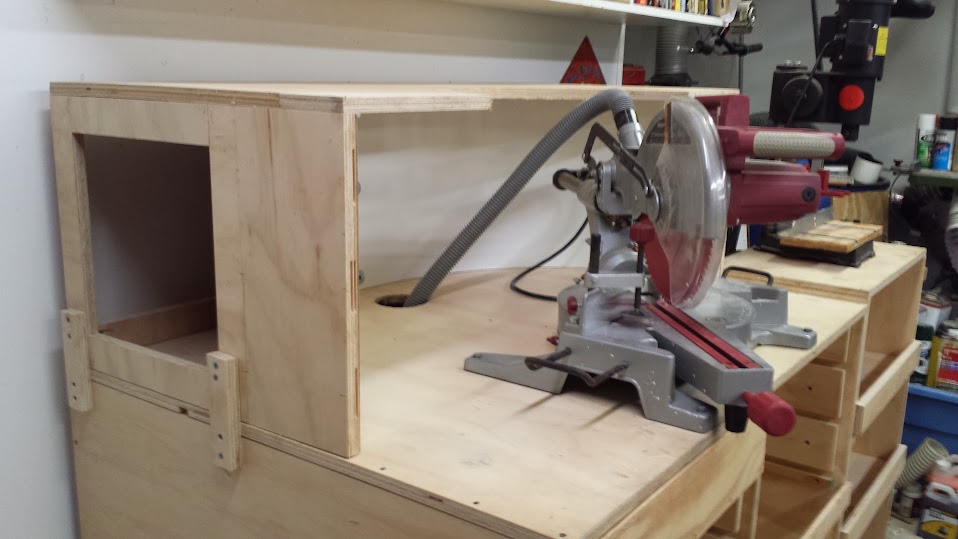 Extension pieces installed, somewhat sloppily because I didn't
spend the time setting up my biscuit joiner right, but it's solid!

Attachment to the miter saw bench is very simple using just plain plywood cutoffs and screws as mending plates. It is all quite solid and secure.

The dust hose from the back / top of the saw is sourced from a Hyde Dustless Drywall sander kit, and is adapted to the saw dust port via a couple of wraps of Gorilla tape, and then screwed into place using the OE screws from the saw. The hose and power cord are kept from snagging up with the operation by holding them to the tail of the saw in the stock location, by replacing the power cords clamp with plastic pipe strapping for both. 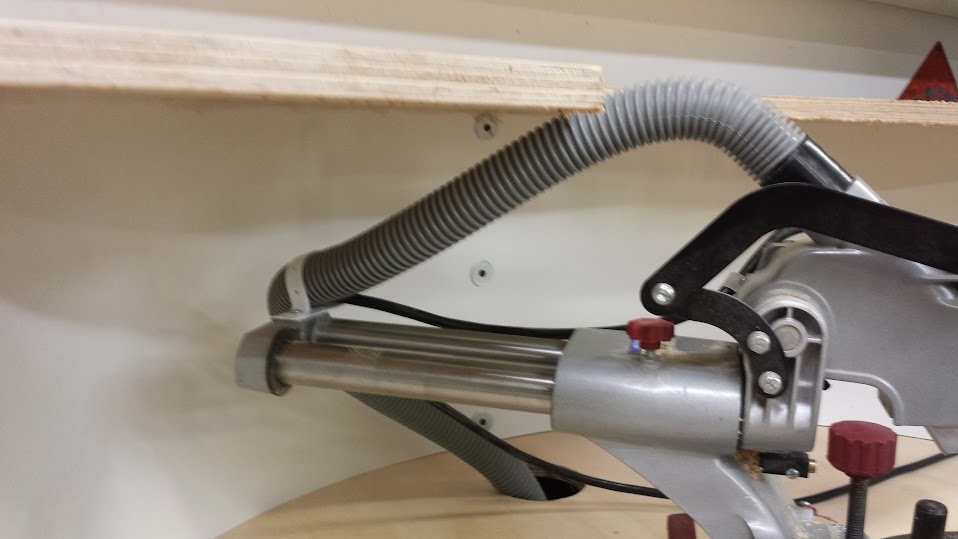 The black stuff on the end of the hose is the Gorilla Tape.
Note the white plastic pipe strap from Lowes.
We just barely clear the hose this way!

The 4" hole, not being quite large enough for the thin wall S&D pipe used for ducting, was relieved just enough for the pipe using a high speed rotary tool.
Not officially a Dremel tool, but the same kind that Dremel is known for, but mine is a Black and Decker RTX multi speed unit.
I outfitted it with the large drum sander attachment, tightened it down a hair, and went to work on it... It didn't take a whole lot of effort.

I have created my 90 degree bends within the cabinet, and just outside to go vertical up to the ceiling using 4 @ 45 degree elbows, and short pipe nipples glued together with clear silicone adhesive caulk. a pipe nipple with a blast gate was assembled using the same method, clear silicone adhesive caulk. I will attach screws as conservatively as possible. I am in no rush to get this done, I would rather rely wholly on the silicone and pipe straps to hold it in place. I now wait for the silicone caulk to dry before I install them.

Once this is done, now that I have the miter saw bench squareness issue, * ahem, * squared away as it were... I can move on to finishing up the drawers.

Items that are pending in my shop build / organization quueue.

#1. Above the mechanics toolbox shelving. I have a total depth of 32.25" from ceiling, to top of toolbox with lid open to work with.
The width I believe is 24", I need to re-measure that!.
I am planning on at least 2 shelves, 12" deep allowing for storage of things like automotove aerosols like carb cleaner, brake cleaner,
engine cleaner and the like...
#2. Finish the miter saw cabinet drawer build. These are VERY basic boxes.
The slides are simply the box bottoms extended out the sides riding in slots and lubed with bees wax to keep them slick.
#3. Put up all the woodworking finshes, strippers etc... in the proper cabinet.
#4. Migrate my table saw and router accessories from the tote on the shop floor to the drawers in the cabinet.
#5. Migrate selected handheld power tools back to miter saw cabinet off of workbench lower shelf.
#6. Take the riser block that extends the floor "step" in the garage, rip the excess off, clean floor, and install with Liquid Nails for projects. Paint.
#7. Complete drywall work on between doors wall. Small patch still needed, and sanding / remudding. I just don't want to do it.
#8. Finish installing insulation in remaining wall, and patching drywall. Paint.
#9. Replace attic extedning stairs, correcting the badly done framing with proper hangers etc...
#10. Paint.
#11. Move freezer from kitchen into shop.
Posted by Daves Workshop at 9:31 AM