It would appear that somebody wanted my wheels while I was at work yesterday.

Even with the Pro Comp wheel locks in place, they managed to get the lug nuts loose enough, that they worked their way off, within a block of my parking space, and bad things followed...

Of those bad things that followed, I suffered damage to 2 of the wheel studs, one was bent so badly the lug nut wouldn't go back on, and another was sheared clean off. So off to Autozone I went to get a couple of replacement studs, an open top lug nut (to allow me to press the stud on), and back to the house to fix this mess... 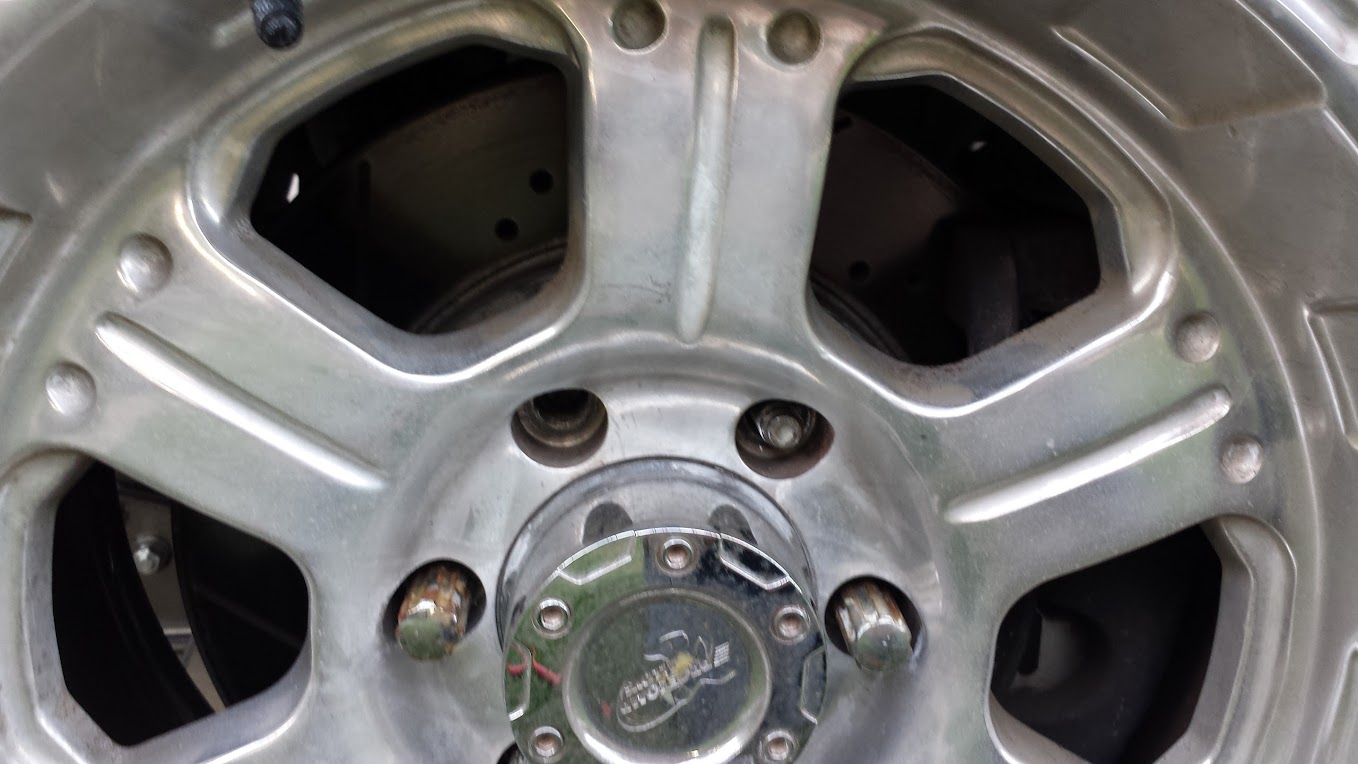 I managed to get things put back together securely, and security is following up on some leads so we will see where this goes, but it DID give me an opportunity to actually put to real use the new Pittsburgh Automotive 4 ton floor jack, and 6 ton jack stands. 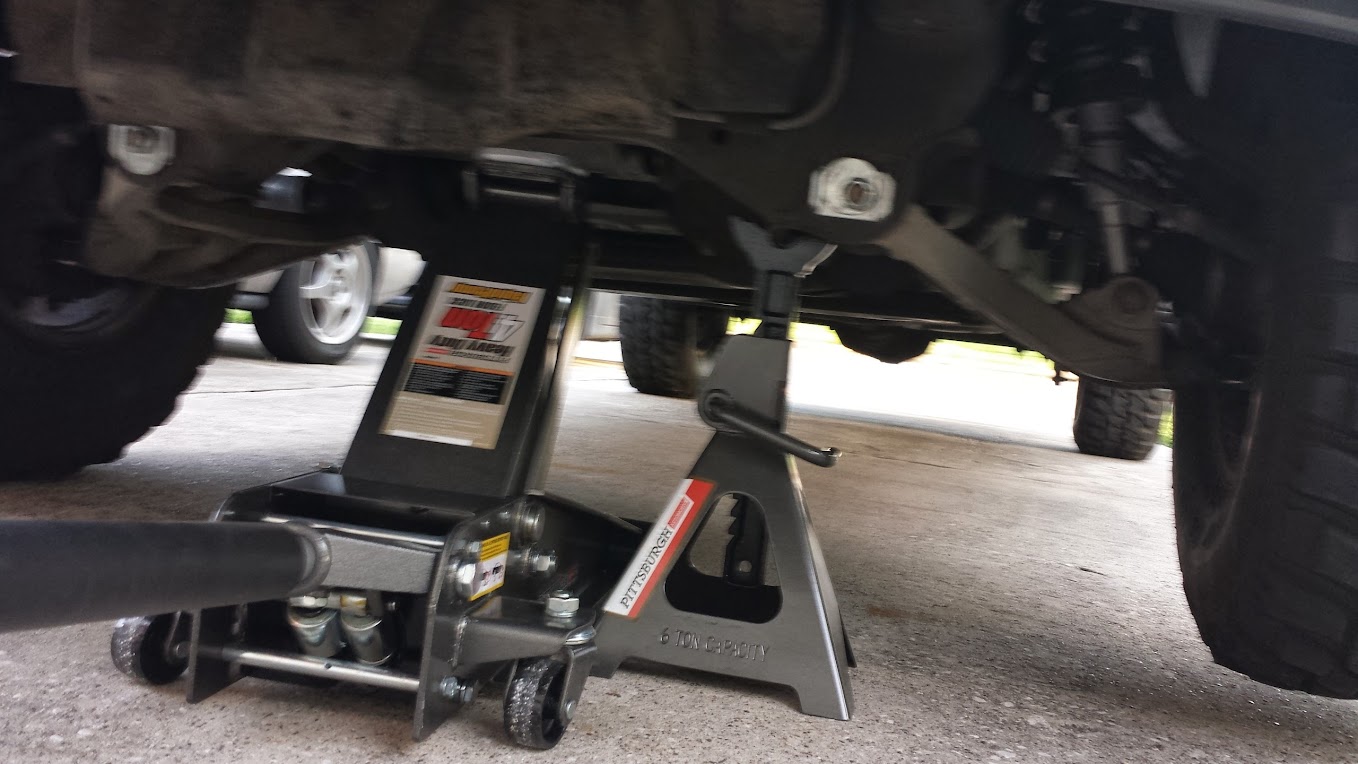 The lousy reason to need this now not withstanding, I must say I am more impressed than I expected to be. I spent my first career working as a professional mechanic, and have remained around auto repair as a hobby since then. To say I am familiar with jacks / stands etc... is a n understatement. I have used everything from the pitiful scissors jacks that vehicle manufacturers include, to the giant industrial jacks for heavy trucks. And at least from the initial use, I can honestly say this Pittsburgh jack lifts my F150 with ease. Securing the lift on the Pittsburgh jack stands as well are solid and secure. Every bit as good as the much more expensive "Tool Truck" models I have used in the past. The jack operates super smoothly, lifts quickly, and contrary to what I have read in some other reviews, in my experience thus far, lowers predictably. It doesn't take too much of a twist of the handle to get it to start lowering, I guess if you overturn it, sure it will drop fast. That is operator error, not a problem with the jack! I haven't yet greased the zerk yet but will do so here probably this weekend to make sure I get the maximum life from this jack. The jack stands, are beefy. If you are familiar with the 2004 - 2008 F150, you know how large that is, take a peek at the stand under it compared to say the control arm and you will know just how massive these things are. They are good and heavy, the "teeth" and cam of the adjustment parts are well formed, and everything is as it should be. The ONLY thing I find lacking in the jack stands is also commonly lacking on most others, and that is there is no rubberized grip / handle on the lever for the cam. I think it was a pair of older Craftsman jack stands I had used a friend owned that had that feature and I REALLY like it. I may plastidip mine to get that rubber coating...

As I was reassembling the studs to the hub flange, I started off by using my Harbor Freight "Earthquake" 1/2" impact wrench. It was working great, I was honestly getting concerned for the socket I was using and the just gobs of abuse the hammering action of the impact was producing, so instead I opted for the high torque / low impact method (putting the socket on a 32" breaker bar, and leaning all of my substantial weight into it. It went in with every bit of force my far too much weight can muster. I won't go into the weight issue, but the fact is that the impact itself couldn't muster the amount of torque that I can generate with a long bar. Gotta love mechanical advantage. That being said, the impact did perform EXACTLY as it is supposed to. I am now completely confident in my compressed air systems performance. 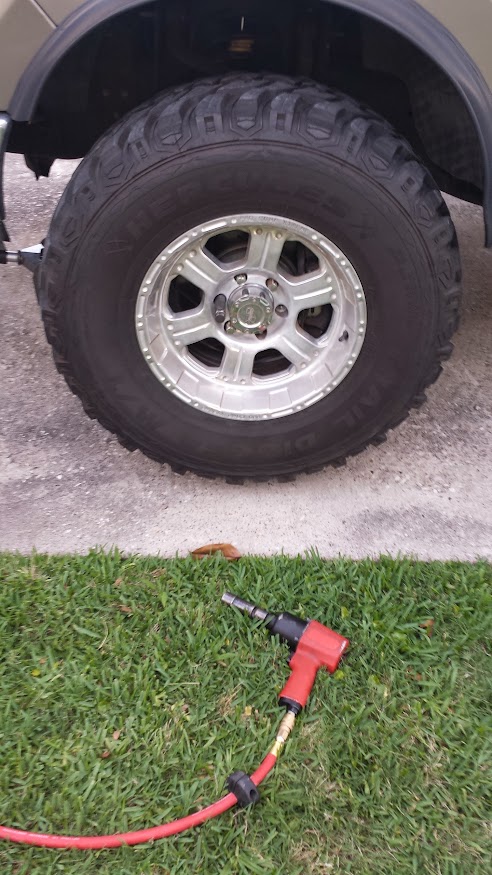 Typical of the Earthquake guns, my nameplate
label fell off and is now in the weeds somewhere
at my Brother in laws shop.

I do however have some concerns with the air hose that came loaded on the hose reel. I am getting some "material transfer" from the hose itself to my hands when I handle the hose. I mentioned when I originally got the thing that I suspect I am going to need to swap in a better quality hose eventually. I am sad that Harbor Freight no longer carries Goodyear air hoses. However Northern Tool has stacks of them, so I guess I will get one there when this one goes bad.

The swap job took me a bit longer than I expected, but that was because of me trying to run the first stud in with the impact, I got it in at a bad angle and blew the splines on the stud itself, had to go back out and source another one... (yeah, I knew better, I just didn't DO better...).

There is (not pictured) some damage to the back side of the rim that has me concerned about being able to properly balance it. Thankfully Pro Comp is selling the 1089 17x9 in 6 on 135 again... I have 2 on order, will replace both fronts, and have the right front rim rotated to hold the spare tire.  So I guess that even though I did get handed a lemon as it were, at least I am trying to make lemonade out of it.
Posted by Daves Workshop at 10:30 AM