Again with the air system. I had previously been fighting multiple leak failures, and thought I had it solved with the PTFE paste thread sealant. However there was one joint, the male connection for the hose that connects the air filter / regulator to the hose reel, that simply, no matter what, kept after about 6 hours, would blow the pipe thread sealant out of the joint and leak like crazy.

Last night, before I fixed the Blue Point air ratchet, I had finally had enough of the bleeding down this dumb joint caused, and opened one of my spare Harbor Freight I/M Quick Disconnect sets. If anyone is even vaguely interested, I am using Harbor Freight Item #68237 5 Piece Brass Industrial / Milton Quick Connect Starter Set. Sadly though, they only come with one female threaded male plug for hose end use...

I carefully applied the PTFE pipe thread compound on the male threads, and proceeded to install the new fitting on to the existing male hose end. With my combination wrenches, I simply snugged the fitting down. Not super tight, but not so lose that it will work its way loose. 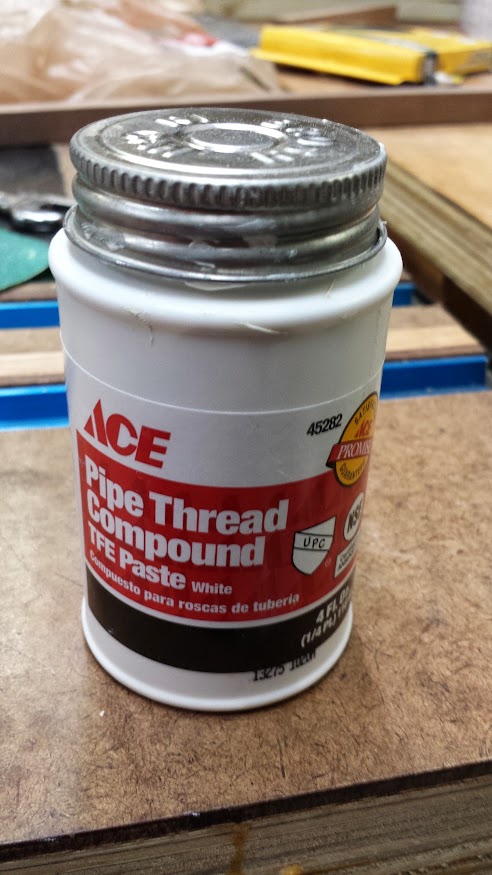 I should mention that I sourced my Pipe Thread Compound from my local Ace Hardware store. It needs to be mixed up after sitting for a while as it separates, but once mixed, it applies reasonably easily, and is easy to clean up the excess.

Once the hose end connector was installed, I cleaned up any excess pipe compound, reconnected the hose, and then pressurized the entire system...

After this I figured I would give in an hour or so, which was about as long as it took for the old fitting to start the leaking. So I fixed the air ratchet, tested it out, did the work on the truck, and came back to test the air fitting. Soapy water test showed no leaks, on any of the joints, period. 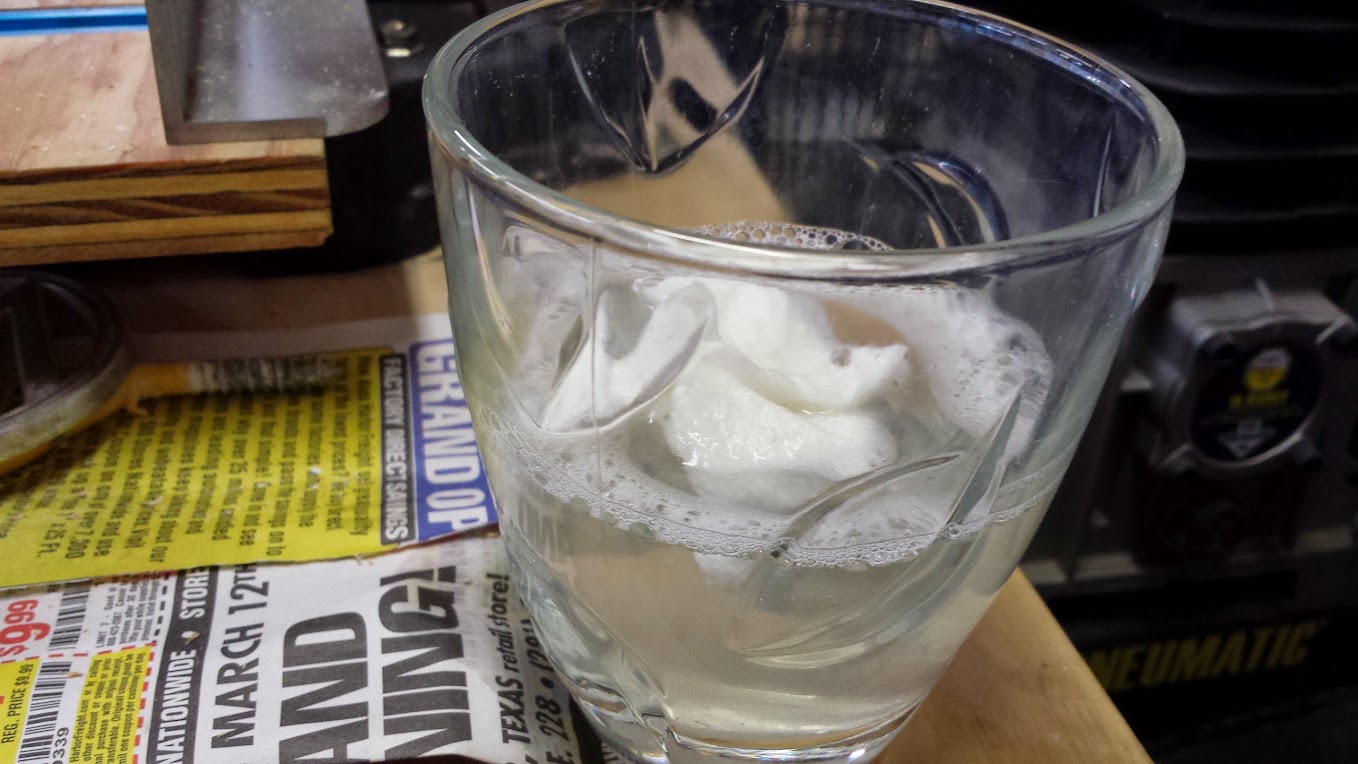 Testing is very simple, just put some dish soap, and water in a glass, toss in a paper towel and mix it up getting the towel saturated. Squeeze out any excess that would run off, but leave the towel wet enough to transfer some of the solution when you get to the joint in question. They simply dab the solution where you want to test. (Sorry the pics of that process I tried to take I can't manage the camera AND applying the solution at the same time, maybe I can con my wife into shooting the pic for me?). Check for bubbles. And I don't mean bubbles just sitting there induced by the process of putting the solution on, but new bubbles. You will KNOW if you see them, they are REALLY obvious... In this case, there was no obvious leak.

At that time I put my tools to bed, powered off the compressor, but left the system pressurized, noted the pressures on the gauges, 150 psi tank pressure, 125 PSI from the compressor regulator to the filter, and 90 PSI at the regulator / filter, then finally closed up shop for the day.

This morning, 12 hours later, I went out and looked to find that the gauges hadn't moved a hair, pressures are still exactly where I left them yesterday, and the soapy water test still showed no leaks...

This evening, a full 13 hours after leaving for work this morning, I double checked the pressures. Somewhat foolishly AFTER testing out some air tools so the pressure in the tank dropped 10 psi... It DID read 10 over this reading... 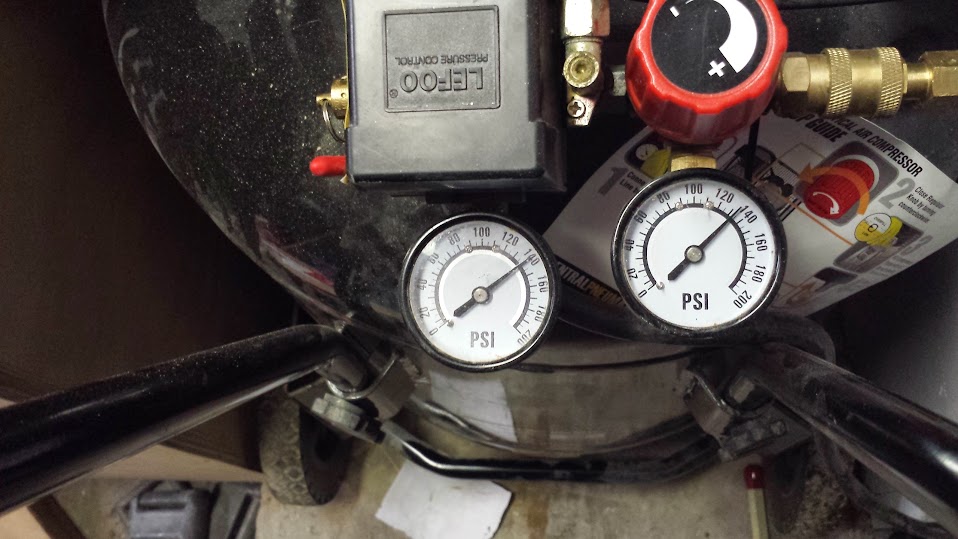 The 140 PSI tank reading was due to me running the air ratchet
before I thought to take this pic. It really was holding steady at 150. 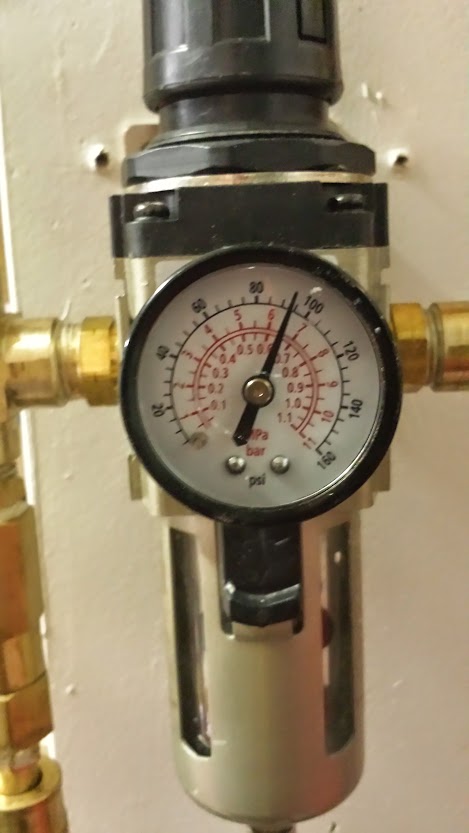 What I find most irritating about this whole ordeal is the original fitting LOOKS good, and there are no immediate leaks in the system, but slowly, over a 6 hour time period it usually became a big leak.

Was there foreign debris in the pipe dope that was used with the old fitting? Highly doubtful. I clean my threads before connecting them, and the bottle of pipe dope was bought new, and ONLY ever used on this project. There has been very little opportunity for contamination.

Now the tool snobs, and Harbor Freight haters are going to instantly be thinking "you get what you pay for", and partially they are right, you get Marketing, TV and Radio ad time, and a very well compensated, bloated executive ranks with brand name companies. Branding costs big bucks. I have had similar failures with "Brand name" fittings and tools. Remember, it was a Snap On / Blue Point air ratchet that got me working on pnuematics last night in the first place! And in the Auto Repair tools world, there simply is no better tool brand than Snap On. And they KNOW it, and charge accordingly...

A note to my woodworking readers that may not know about Snap On Tools. Think greasy Festool and you get the idea...

I am now short 2 of these 1/4" FPT x I/M male quick connect plugs from my set of spares. I should re stock from Harbor Freight as soon as I can. Yeah I can use FxF couplers, but that would induce yet another joint that is a potential source for leaks...

I have one more phase of the build out to go through I would like to add a 3/8" Dessicant dryer with oil removal fitler to the compressed air system in order to insure that nothing other than clean, dry air makes it past all the filtration to spray guns. I manually lubricate my pnuematic lubricated tools anyway. So no problem there. I guess I could use an inline lubricator, but I don't want to contaminate my air hoses...   I checked and the flow direction is right, so I will need at least a 3/8" short nipple to make the connection between this and existing. Most likely I will use Harbor Freight Central Pnuematic item #68234 FRL coupler for a cleaner more solid install. I will also need to slide back the feeder hose for the reel to accomodate the extra distance this will take up. The 3/8" FRL (Filter / Regulator / Lubricator) coupler
The photo is wrong. The actual item has a mounting tab
that would be on the right side of the picture partially
overlapping the O ring that matches the left side of the
photo. The connection looks simple enough.


It IS possible I may not go that route though, and try to find a good dessicant dryer / filter that works with 1/2" pipe thread and go with a full out 1/2" sweat copper system. And plenty of folks keep telling me to go with 1/2 or 3/4" plumbing for my pneumatic system, however I have a grand total of 2 drops, and will only ever run ONE tool at a time, and in my experience working as a mechanic when I was younger, the shops were all plumbed with 1/2" cast iron. However a hard line plumbing system would greatly improve durability, but the only hose I am truly worried about is the one in the reel. I don't suspect it will live more than about 3 or 4 years before I have to replace it with a new one.  However several reviewers say they are getting 7 to 8 years out of a hose... I might get lucky. But I won't plan on it! I could reduce 1/2" pipe to 3/8" and keep the hardware that works. 3/8" iron pipe is impossible to find in Houston.

A recommended tool is working great for a colleague of mine that is a big car nut had asked for input on impact wrenches a while back, and I pointed him to the Central Pnuematic Earthquake 1/2" drive impact. He has a DeWalt 15 gallon air compressor, and is finding that it is sufficient to drive the gun And that has made his maintenance on his wife's Dodge Caravan easy as pie... (He had a strut job to do). Mind you. I did the decent thing and offered to loan him mine, but he wanted to buy his own...

So there you go. More success with the HF Earthquake impact wrenches... So far so good!
Posted by Daves Workshop at 8:33 PM