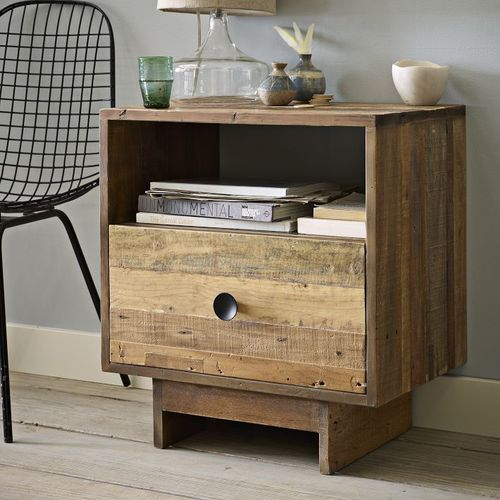 I have been participating in an interesting forum discussion on the subject of reclaimed solid wood furniture and rustic furniture syles. And a particular member brought up a valid point about the fickle winds of fashion. How he wondered with the current trend being somewhat bad for the lumber / forestry industries, if at some point there would be a pendulum swing in fashion back to manufactuers touting new harvest lumber furniture. Or by my own extension when will manufacturers start bragging about their all particleboard construction as a selling point? I really don't see the trend going away from reclaimed, or at least sustainable lumber.

No matter your perspective on the politics of it, the environmental issue has stuck, and the propagation to new generations has been a success.  There are even those that don't follow in the footsteps of the environmental powers that still want to be wise with resource usage. So yeah I don't see THAT market going away any time soon. Especially if the end product is just as well made, beautiful, and durable as items made with fresh cut timber.

Country for example tends to be very basic shapes, with few cutesy ornamentations. Think of a pine hall rack / shelf with heart shaped openings in the stretcher on the back. That would be rustic. Lodge on the other hand would be say log based / natural edge furniture.

Reclaimed simply means claimed from one purpose, when it was done with that, and put to use elsewhere, You didn't go out and chop down a fresh tree to mill up for fresh lumber. Reclaimed could be trees that were cut 100+ years ago that went down a river as a log-barge and sank to the bottom on the trip, dug up, milled and put to use now. Or lumber pulled from taking an old barn, house, or other structure down... Or even as I have done more than a few times, dumpster diving for old Waterbed rails to mill back flat and parallel for new projects... You are re using something that was originally used or going elsewhere... The original owner gave up or lost their claim to the lumber...

There is a good wikipedia entry on reclaimed lumber, if you'd care to read it
http://en.wikipedia.org/wiki/Reclaimed_lumber

The primitive style I think of stuff like what I make for the shop, mostly nail knocker type stuff. Lots of butt joints, and nails or screws, very little fine joinery, very little if any surface prep once the lumber is claimed. Think raw pallet wood separated and cut to length and then assembled... Nothing I would be all that proud of beyond function...  There is, and likely always will be a demand for that type of aesthetic. I bet if they could still be found easily, the old wooden cable spool coffee / dining room table would still be a fixture in college kid apartments the world over!

Now step up a level from the nail knocker type build, and start using pegged butt joints, and you start getting into pieces that have a chance of lasting, and having an aesthetic that is pleasing to more people... Move on to the rabbet and dado joinery and you step up again into more serious territory here. More material prep including finer ways to accent or preserve the imperfections including epoxy / turquoise or whatever filled cracks and knotholes, or dutchman patches and you are moving away from Andy Warhol type art, into say Salvador Dali... From popular, easily approachable and understandable themes to more esoteric and harder to understand touches...

I mean have you ever tried explaining the advantage of through dovetail joints to somebody that isn't a woodworker?

I tried once. My wife looked at me like I look at her when she talks about skin stuff...

I guess whatever floats your boat is what will work, fashion and source of material not withstanding, I believe there will likely always be a market for pretty much every style from the most primitive, to the most ornate.
Posted by Daves Workshop at 4:42 PM