Okay long story short, over the years I have had several sets of hole saws stolen one way or another. Admittedly most of them were stolen when I worked professionally as a mechanic, however one set, an older Vermont American set I picked up / pieced together when I worked in the hardware stores in college grew feet and walked off when I had a roomate. Actually a LOT of mine, and at the time my girlfriends (Now my wife) stuff grew feet and walked off. The roomate blamed his girlfriends daughter, but refused to take any steps to stem the tide of the theft, and therefore, I ended the roomate relationship, and moved on with my life, got married yadda yadda yadda...

Fast forward to today. Still a bit leery of buying expensive hole saws for fear they will either wear prematurely and need to be replaced at a fairly steep cost, or grow feet and walk off. So I tend to buy cheap hole saws / setc...

I tried the Harbor Freight "Drill Master" high speed steel hole saw sets and was NOT impressed with them. However last year they introduced something new. Another house brand they call "Warrior" and they make a reasonable copy, while not perfect, to the Milwaulkee, Bosch, and Vermont American hole saws.

I said REASONABLE, not PERFECT. I do expect these to wear out earlier than the others, but with the use I put them through, who cares? Just buy another full set for what one saw of the other brands cost!

Now I do tend to cut LARGE diameter holes, and the standard 14 pc set doesn't go high enough, so on top of the regular set, I added the Large size hole saw set, which really is just the cups in 3", 4" and 4.25" which is perfect for making a hole to route 4" PVC dust collection ducting!

Checking them out in store, even assembling a couple and chucking them in a demonstrator drill press and spinning by hand to see if I can see any out of round, I found nothing to be concerned with, so I brought home both the 14 pc, and the large size set. Unfortunately the large cup set lacks the blow molded storage case of the 14PC set, and those saws are SHARP! So I had to build a box to house them in.

Out came the scrap plywood, and some small hinges I had laying around. I had to go to Home Depot to get a catch to keep the lid closed...

Simple screw construction made for fast assembly, and since this is just a shop storage fixture, looks aren't super important. Honestly, I messed up and had to redo one of the parts as I did not drill my pilot holes deep enough and ended up splitting the plywood.

Due to the size of the hinges used, I had to space my hinges out. I guess I could have mounted them differently, but I didn't really want to, I digress though. I mounted the back of the lid UP so that the screws for the hinge could get a solid purchase, to even things up I added a "foot" of tempered hardboard to the front of the lid. It also helps keep the lid from banging shut. The gap at the sides and the back were left open. I am not trying to seal these off from the elements, just trying to keep them, and people things around them protected from impacts with those teeth, and keep them organized! 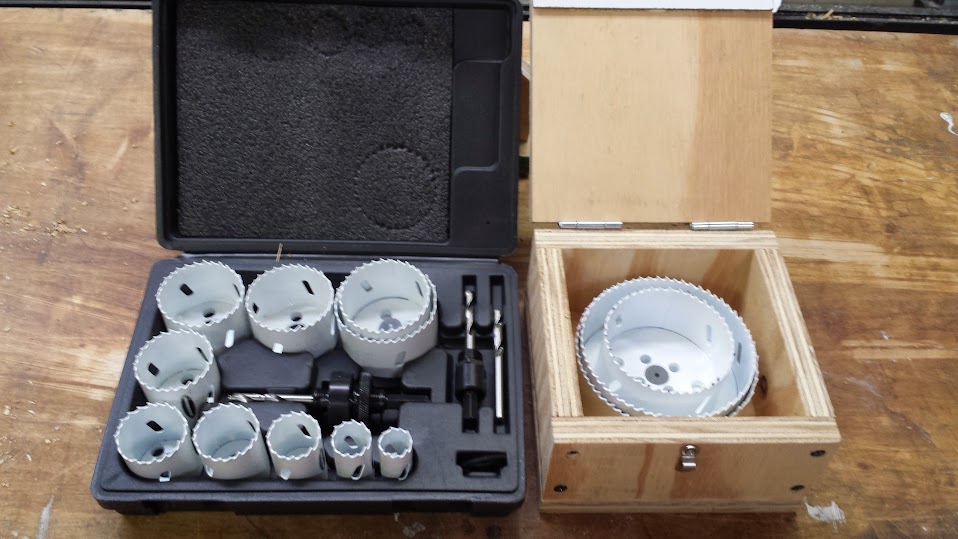 With the box made, both hole saw sets can be neatly stored. 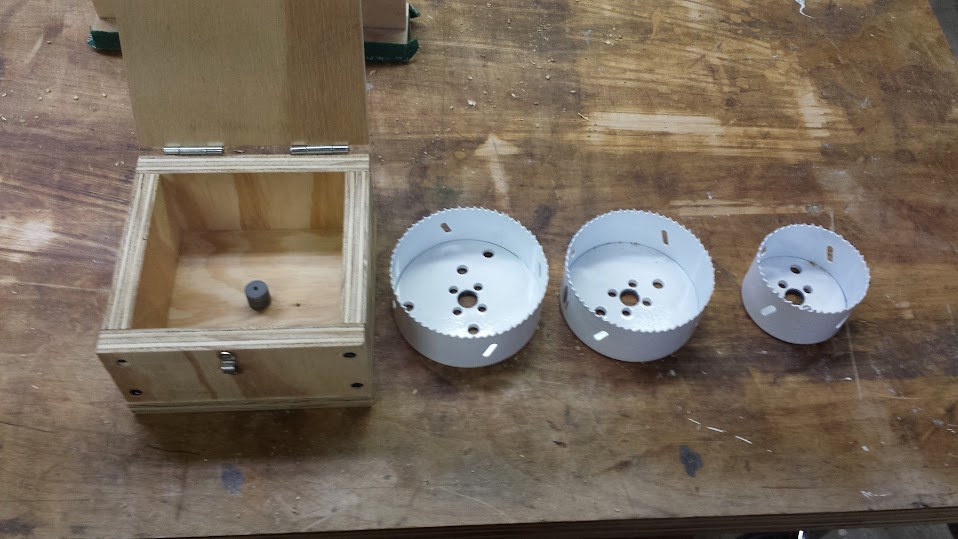 The internal dimensions of the box are 4.5x4.5x2.75
Just enough space for the cups to clear the lid. 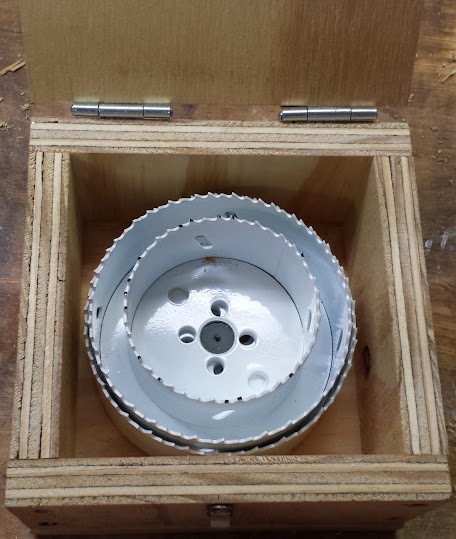 The threaded piece from the original packaging was attached to
the base to thread the cups on to. Holds them solidly. 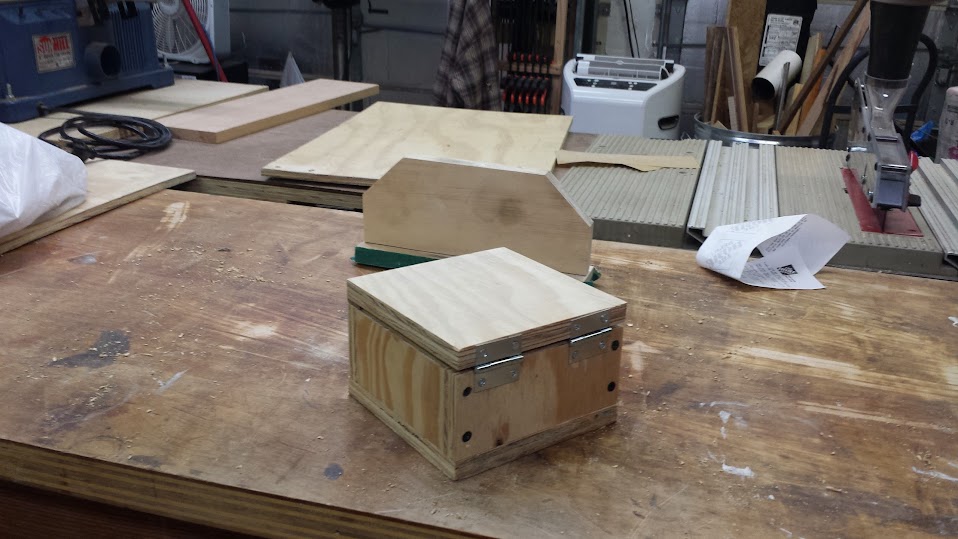 Some old utility hinges that have been floating around a drawer
were attached. They needed a bit more space than the 3/4" stock
could provide, I nudged the lid up, and attached a foot at the
front of the lid to keep it level! 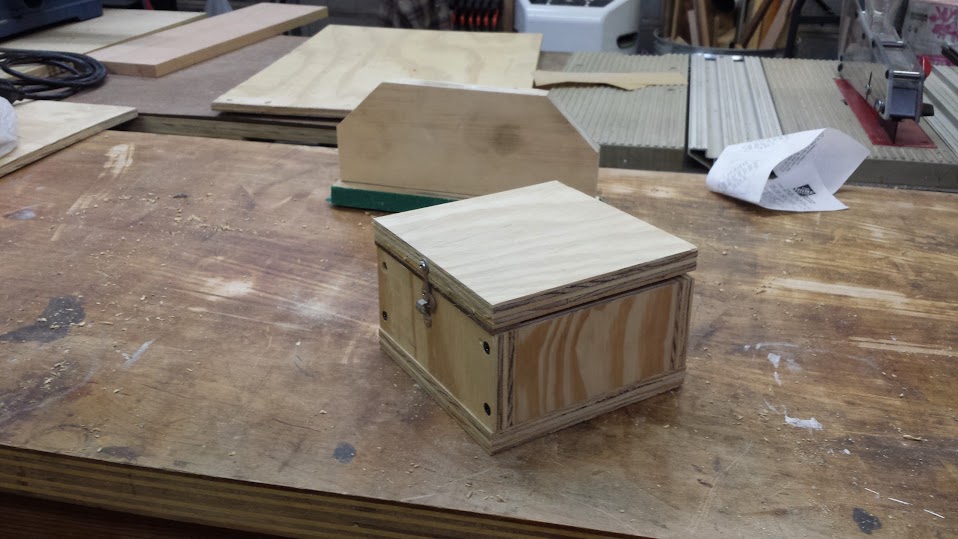 A simple hook and staple type catch was bought at Home Depot
to keep the lid closed. Works great!

Posted by Daves Workshop at 5:33 PM